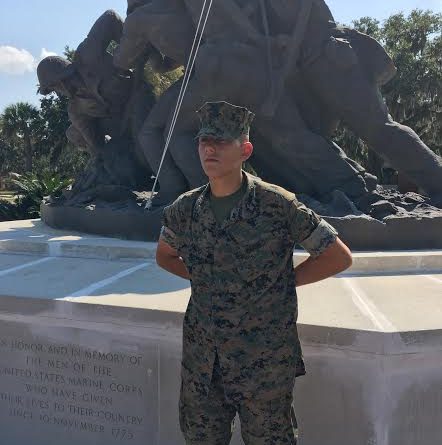 Before he graduated from Framingham High School in June, Kevin S. Lando knew he wanted to be a U.S. Marine.

Lando, 18, “grew up watching his dad in uniform” and enlisted with a recruiter, almost a year ago.

Last month, after a dozen weeks of training, Lando graduated as a private first class with the U.S. Marine Corps, with his family in attendance, at Parris Island in South Carolina. He was part of the graduation class for Kilo Company, 3rd Battalion.

“It was a proud moment in our lives,” said Kevin’s father Sean, who was a Framingham Police Officer, until he retired in 2013.

“I’m happy to have him home for a while,” said mom Brenda.

Lando is committed to the military for five years, and has been home for about a week.

He is awaiting word on his assignment as an intelligence specialist, which could start this month. Lando has requested to delay his 3-month training in Virginia, to work with the local recruiting office, specifically with his recruiter Staff Sgt. Ian Rutherford.

“He’s one of the best in New England,” said Lando. “I want to be be able to tell others first-hand what it is like to train to be a Marine.

Back in July, Lando was ordered to stand on the “yellow footprints,” just like hundreds of thousands of recruits before him.

For the next 13 weeks, he endured extreme mental and physical training in South Carolina from 5 a.m. until well past sundown.

Recruits are pushed to their limits and taught to be resourceful and survive life-and-death situations.

One of the last training exercises before graduation is the “crucible.” Recruits are expected to complete a 54-hour training exercise in full gear, including a 9-mile hike. During the “cruicible,” recruits are given limited amounts of food and sleep.

“It was demanding, both  physically and mentally. That is all I can say about it,” said Lando.

The Hemenway Elementary and Walsh Middle schools students said the military training has made him stronger. The 6-foot, 1-inch Lando was 240 pounds and is now a lean 185 pounds.

He said the support of his family and the his girlfriend Marissa Proia, and the weekly letters, helped him while training in South Carolina.

“You could tell which recruits had a strong support system, and which did not,” said Lando.

“We tried to be as supportive as we could,” said Brenda, of her youngest child. Lando has an older sister Kristina.

“The physical training was extremely tough,” said Lando. “I learned a lot.”

Upon completing of the training, Lando was presented his “Eagle, Globe and Anchors,” symbolizing the completion of his journey to becoming a U.S. Marine.

Originally, Lando was considering an assignment with military police, but he tested well for intelligence.

“The skills I learn in the Marines are transferable skills for when I get out,” said Lando.