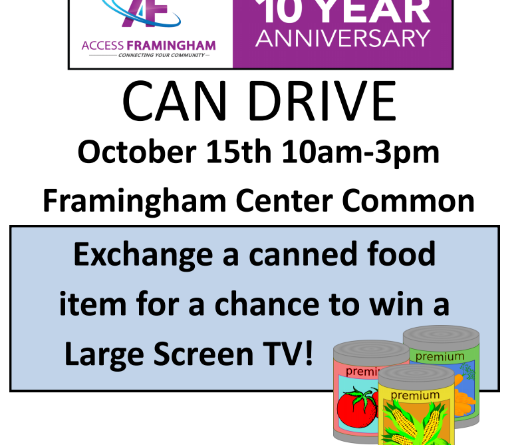 FRAMINGHAM — Access Framingham is celebrating its 10th anniversary with a 10 month effort of community service and support.

As part of the 10th anniversary, AF-TV will feature a different organization each month and support a cause.

The first 10-10-10 event is First Parish in Framingham’s annual Pies on the Common.

Access Framingham will host a can drive at Pies on the Common. Attendees are asked to bring a canned food item for a local food pantry. Each person who donates a can will be entered to win a large-screen digital television.

Also at the 26th annual event AF-TV will ask attendees to film testimonial to Pies on the Common. The footage will air live and later on AF-TV.