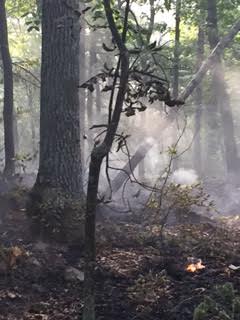 While last night’s storm brought a lot of rain to parts of Framingham, it brought no rain to the Nobscot Reservation, where firefighters have been battling a deep-seated brush fire at the 480-acre site since Wednesday afternoon.

“We will be back at the Boy Scout camp again this morning,” said Framingham Assistant Fire Chief Mike Dutcher to Framingham Source.

Framingham will be assisted today by firefighters from District 14 and the District 4 brush fire task force. The district 4 forestry task force mobilized at Gillette Stadium at 6:30 a.m. before heading to Framingham. They include the communities of Stoughton, Sharon, Easton, Foxboro, Canton, Walpole, Holbrook, Avon, Mansfield, and Randolph.

Firefighters were at Nobscot Reservation for almost 12 hours on Friday.

There was a fire watch at the property overnight, said Dutcher.

“It is too dangerous for us to fight the fire at night,” said Framingham Fire Chief Joseph Hicks. “We put a watch on it at night. We have eyes on it, so we know where it is at all times.”

The fire first started on Wednesday, July 20 just after 4 p.m.

Firefighters from Framingham and Sudbury were on the scene Wednesday night for more than five hours, said Dutcher.

Framingham Source was the first media outlet to report on the brush fire Wednesday night.

The fire was contained to a 2-acre area Wednesday and early Thursday, but expanded to 6 acres later.

On Thursday, about 80 firefighters from more than a dozen communities, including Fire District 8 battled the fire at Nobscot Reservation for more than 12 hours on Thursday.

Another 60-plus firefighters were back battling the stubborn fire on Friday.

Yesterday, Dutcher said he expected firefighters to be on the scene through the weekend, at least.

“The weather is not in our favor,” said Dutcher, who said the short burst storms don’t bring enough rain, but bring dangerous winds.

The fire has not damaged any of the structures on the 480-acre property, owned by the Boy Scouts of America.

Framingham Fire Chief Hicks said the fire actually went right past one of the structures.

He said experts on site removed all the combustables near all the structures, and soaked the ground around the structures to pull the fire away from any structures.

“That work paid off as the fire went right past one structure,” said Chief Hicks.

Photos by the Framingham Fire Department