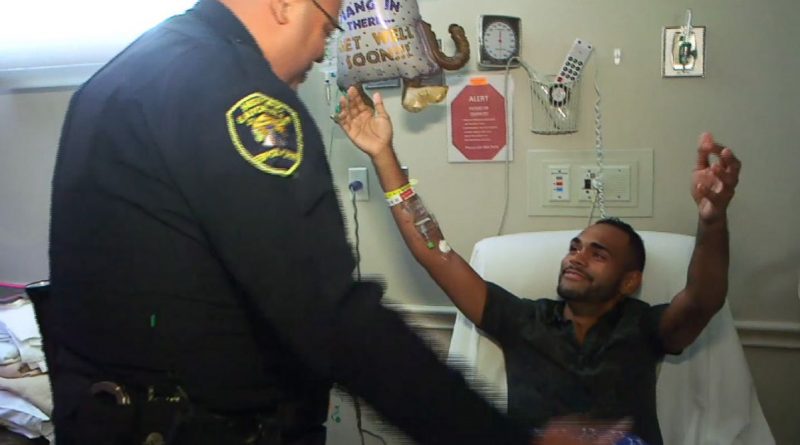 Early Sunday morning, Angel Colon, a Framingham native, was shot multiple times and trampled on by others trying to escape the Pulse night club.

As he lie bleeding on the floor of the Orlando night club, with wounds and now broken bones, he was eventually dragged to safety by a police officer across the floor of the club, covered in glass.

Thursday, Colon, still recovering in a Orlando hospital met with the police officer who saved his life.

“My name is (Eatonville) Officer Omar Delgado. I’m one of the ones that helped you get out of harm’s way. I need a big hug,” according to video from Florida.

The video then shows the two hugging.

“I’ve been wanting to see the man that took me out of that horrible place,” said Colon.

“I’m glad now that he can be with his family and continue living his life,” said Delgado.

“Seeing him again in a different environment, in a happy place, it is awesome,” Colon said. “I’m so happy.”

Framingham Source was the first media outlet to report that Colon, who attended Brophy Elementary School and Fuller Middle School, before moving to Florida, was one of the 53 people injured in the night club attack, that killed 49 people.

While he is still recovering in the hospital, he has no medical health insurance.

A military friend of his Jordan Delacruz set up a GoFundMe account to help Colon and his family.

“Angel is a good individual, who brings joy and laughter to the people he encounters,” said Delacruz, to Framingham Source Monday night.

Delacruz called Angel a “warrior” and a “fighter.”