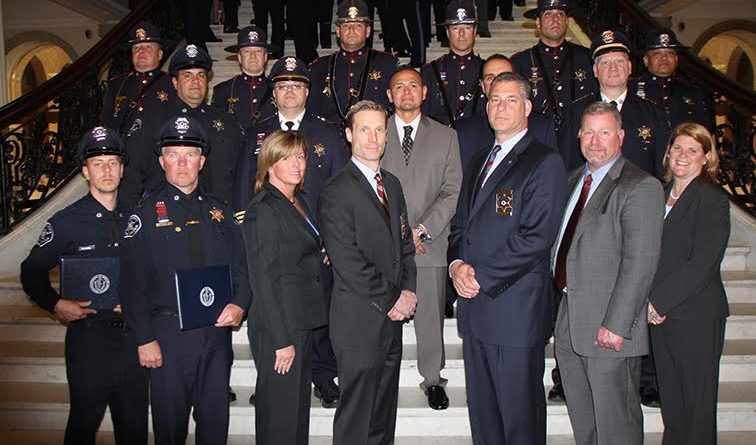 BOSTON –  Three members of the Middlesex Sheriff’s Office were recognized at the Massachusetts Correctional Employee of the Year Ceremony, held at the State House. Awards were presented to 25 officers representing seven sheriff’s offices as well as the Massachusetts Department of Correction during the May 20th ceremony.

“This ceremony is an opportunity to recognize those officers who go a step beyond the important responsibilities already placed on them,” said Sheriff Peter J. Koutoujian. “So much of that good work these men and women do happens outside the public view, but here are twenty-five examples of how that work impacts all of us.”

Hosted by the Executive Office of Public Safety and Security, this year’s keynote speaker was Gov. Charlie Baker.

Lieutenant Brian Crane received a Community Service Award for his creation of the Correctional Officer Memorial Foundation, an organization that supports corrections officers and their families in times of crisis. Lt. Crane started the foundation four years ago and in a short time it has become a trusted source of assistance for numerous employees and their families.

“In the shadow of this terrible disease, the Snow family and Officer Keith Zewiey have developed a bond that continues to inspire all of us on a daily basis,” said Sheriff Koutoujian. “Brad Snow’s memory is well-served by these men, and our office is a better place because of them.”