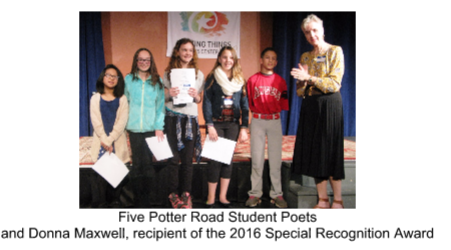 The following is a press release from the Framingham Cultural Council. Photos courtesy of the Council.

FRAMINGHAM – The Framingham Cultural Council (FCC) held its 7th Annual Awards Reception on May 9, at the Amazing Things Arts Center.

Diane Hartung, the Cultural Council chair, was the Master of Ceremonies for the event.

For 2016 the Framingham Cultural Council awarded 31 grants totaling $27,702, with 26 grants for artistic, humanities or science related projects and 5 grants to provide subsidies for school children to attend cultural events. Members of the Cultural Council presented the awardees with a certificate from the State Senate and a certificate from the Massachusetts House of Representative. Representatives Chris Walsh and Carmine Gentile and State Senator Karen Spilka made short remarks indicating their support for Cultural Councils.

Entertainment during the evening included a musical presentation by six singers from the Century Chinese Language School Arts Group.

Donna Maxwell was given the 2016 Special Recognition Award for her consistent dedication to and advocacy of the arts in children’s lives.

Donna Wresinski, Director of Fine and Performing Arts in the Framingham Public Schools, was given the 2016 Cultural Council Contributor of the Year award for building the Framingham High School Theater and drama program, which has provided award winning cultural opportunities for many students over the years.

The Rita and Bill Collins Memorial Arts Scholarship is given to a senior graduating from a Framingham High School. Rita was the Cultural Council administrator extraordinaire and, when she retired, a member and treasurer of the Cultural Council until her death last year. Bill, also a former member of the Framingham Cultural Council, was a talented graphic artist who designed a variety of logos, including the logo used by the FCC, and other materials for numerous organizations in Framingham.

This year the Framingham Cultural Council awarded the Rita and Bill Collins Memorial Arts Scholarship to Anh Tran, a senior at Marian High School in Framingham. Anh was selected for this award based on her acrylic painting titled “Life of Human” depicting a hand holding a tree and for the essay describing her enthusiasm for art. She is an international student from Vietnam who entered Marian High School in her Sophomore Year. She said that her dream is to be an artist and bring art to life so people can enjoy it and understand the value of art in life.

The scholarship award was presented by Maureen Valentino, Rita and Bill’s daughter, and Nick Valentino, their grandson. Kyra Kabler, the 2015 scholarship recipient was also recognized at this event.

The Framingham Cultural Council is part of a network of 329 Local Cultural Councils serving all 351 cities and towns in the  ommonwealth. The LCC Program is the largest grassroots cultural funding network in the nation, supporting thousands of community-based projects in the arts, sciences and humanities every year. The state legislature provides an annual appropriation to the Massachusetts Cultural Council (MCC), a state agency, which then allocates funds to each community. Additional funding came from Bose Corporation, MutualOne Charitable Foundation, and the Middlesex Savings Bank Charitable Foundation.