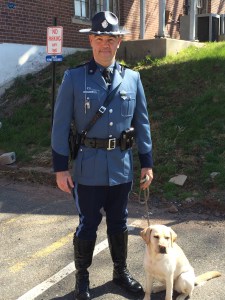 The electronic storage detection (ESD), or computer dogs, are specially trained to locate items associated with computers and cell phones for crime cases.

Winnie is the first Massachusetts State Police computer dog to complete the extensive training program and is now certified to start working.

Dr. Jack Hubbal, a chemist at the  Connecticut State Police Forensic Lab, was able to isolate a chemical compound, Triphenylphosphine Oxide (TPPO),which is found in phones and computers. Another compound found is, Hydroxycyclohexyl Phenyl Ketone (HPK), which is found on DVD’s, CD’s, and floppy disks. The canine trainers were able use the two compounds to train the dogs in searching for electronics.

According to the trainers, the dog is capable of detecting any kind of electronic storage device including, but not limited to DVD’s, USB drives, hard drives, SD cards, and micro SD cards.