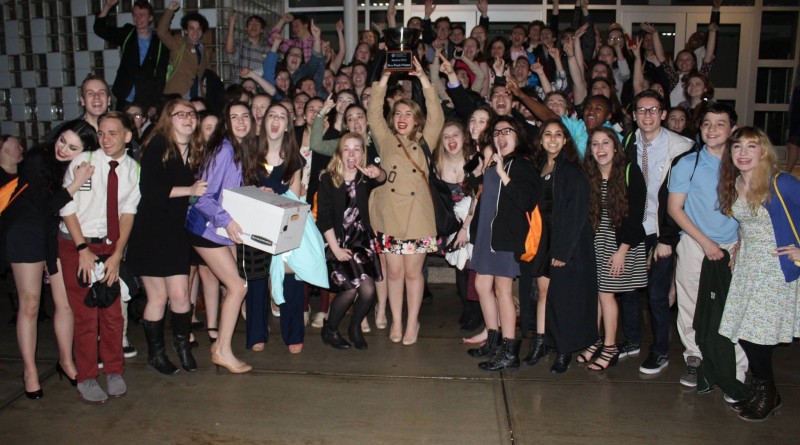 Editor’s Note: This was originally published on the Petroni Media Company’s Facebook page before Source’s launch date of April 13. It was tranferred on to Source for its launch on April 13.

For only the second time in school history, the Framingham High School Drama Company are state champions.

The buses returned to Framingham High School after 11 p.m., with a Framingham Police escort.

Framingham High has done well in the state’s drama competition ever since Framingham K-12 Arts Director Donna Wresinski began entering the Company in the competition.

Framingham has made the finals 11 of the last 14 years, including this year. The company’s only recent miss was last year.

The last time the Company won the state’s highest drama award was in 2006 – a decade ago – when Framingham High drama teacher Chris Brindley was a student at Framingham High.

“It’s surreal, really. I’m so excited and the kids are freaking out,” said Brindley outside Framingham High last night, as the more than 100 students in the cast and crew were still celebrating and taking photos.

“It was my senior year, that we last won with Tales of Trickery,” said Brindley, who co-directed the production with Wresinski. “It felt just as exciting, if not more exciting with this show.”

Brindley said “we proved to the state we can do all kinds of theatre. That was special.”

But Wresinski said what makes this win so special is “this group of kids.”

“I can not imagine a better group of kids to win this with the second time,” she said. “They embody what it means to love theatre, love being together, love working on something more important than they are, bigger than they are, and they are so much fun.”

This past Thursday, Friday, and Saturday, Framingham High students watched 13 productions, and 13 high schools watched their show on Thursday night.

“We did it for the kids in the house. We just want these kids watching it to have a show for them. Not something really high brow or something very moody or heavy,” said Wresinski. “I think the audience was so bought into what we did, that is why we won. The judges could not help but be involved in that.”

Brindley agreed. “Every director and every kid in the theatre was just so appreciative of us presenting this show,” he said.

Even after the bus ride home from Boston, Wresinski was still excited for the students in the company.

“They won with grace,” said Wresinski. “And joy, without being egotistical about it. Without even being confident about it. They just went in to do the best work they can do, and the state recognized it. That is what makes it special, this particular group of kids. It is just an amazing group of kids.”

“I’m so happy, so excited, so grateful,” said Framingham High Drama Company President Jamey Miller. “I’m really excited for the entire drama company, but very excited to be a part of the senior class that experiences this.”

Miller played the cow, who lives in the school in the production based on a popular children’s chapter book series.

“When we first started this process, it was amazing from beginning to end. We worked so hard on this production, in character depth, in lighting, in sound, in design, in every little aspect of this show,” said junior Andrew Caira, who played a trio of characters in Sideways Stories.

Caira, a junior, won a METG all-star award in the preliminary round, the semifinal round, and Saturday night in the final round for his acting in the production.

“We’ve been working hard since day one, and when I heard our name was called for the Silver Cup, it was amazing to find that all of the hard work we put in was recognized. It is just amazing,” said Caira.

“I am so excited. This is so surreal,” said senior Grace Graham, who won an award for the third time for her role as Mrs. Jewls in the production. “All of us owe this all to Chris and Donna.”

“This program really changes people’s lives. And tonight is evident of that,” said Graham last night, who held the Silver Cup outside of Framingham High for a Company photo. “It has changed my life. I will never forget this. I’m so grateful. We are all so grateful for this.”

“When I first heard the word Framingham, my brain said about a bajillion things, and then it said stand up, as Donna told me if we won, I had to go get the award,” said Miller. “As I walking to get the award, I wanted to hug people, but I just bolted down the aisle to the Silver Cup.”

Besides acting awards for Caira and Graham, the Massachusetts Educational Theater Group also awarded Framingham High with a sound and a lighting award.

Next for Framingham is the New England Drama Festival in Connecticut during April school vacation week on Wednesday-Thursday-Friday.

“We will represent Massachusetts,” said Brindley.

She said the state will provide Framingham with $2,500 to go, but she estimates it will cost about $100 per student to go to Connecticut and there are 100+ students in the production between cast and crew, thus the Company needs about $10,000 total.

She said the Company has already booked a preschool show in Ashland.

Wresinski said there will be a benefit performance for the community, where tickets will be sold.

“I love these kids and I love these parents,” said Wresinski, still bubbling with excitement from the victory outside the high school auditorium last night.

“It will be great to bring both the students and the parents to Connecticut,” said Wresinski, who said the New England Drama Festival is more of a showcase than a competition. 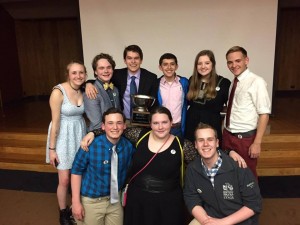